As a part of finals week, Campbell students got free Cookout. Yes, I said free! Some people lined up outside the door 2-3 hours ahead of the 8 o’clock go time. Despite rain looming and a few sprinkles here and there, students didn’t budge. Cookout is what they wanted and Cookout is what they would have. The line of students wrapped down one side of  Cookout’s building and all the way across the parking lot to the furniture store. Flashcards, textbooks, and study guides were being poured over as they waited for the doors to open. As rain began to fall, umbrellas went up but no one moved. Some grumbles were heard about how they were hungry, or oh no it is raining, or that the wait was so long, but that was quickly followed by “BUT it’s Cookout!” That said it all. Hats off to Cookout too. They handled the swarm of camels like a champ serving over 100 students in around 20 minutes, with more still lining up! Talk about service. All in all, it was a great study break for many and free food is always great! Just remember, if you need a study break but you don’t feel like you can be pulled away from studying, it’s Cookout! Go for it. Happy studying ya’ll. 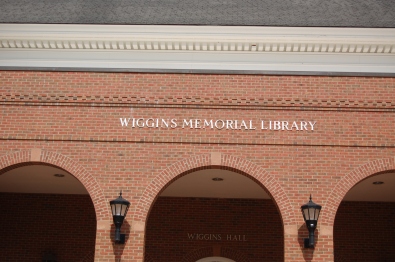 Last week was completely filled with fun and activities at Wiggins Memorial Library.  April 7-11, 2014 was National Library Week and the library staff at Campbell definitely made the week exciting.  Monday was the edible book festival where students and faculty submitted food that represented a book.  There were many winners of the decorations such as best classic book, best in show, and best childrens book.  On Tuesday was the crafts with books event where the library provided discarded books to make origami flowers or use modge podge to cover a picture frame with parts from books.  Also, they explained how to hollow out a book so that it would have a place in it for trinkets.  On Wednesday was the poetry jam for students to read favorite poetry or show off what they had written for contests.  There were also popular poetry books that students could win such as Beowulf, stories by Shel Silverstein, and other collections of poets.  Thursday, students could get advice for how to be a librarian or tips for getting a job anywhere.  On Friday, anyone could go to the third floor and have fun playing games whether it was on the wii or classic board games like Pictionary.  That night, was trivia night and the team of librarians came out on top with the win.  There were four teams, one consisted of all librarians and they came in first.  However, they did not receive a prize and the prizes went to the three remaining teams.  All week long students received grace for fines if they donated books, dvds, or cds.  They could also participated in a scavenger hunt that had clues hidden all around the library and even a clue in the business library.  There were two winners, who both received a $25 gift card to Barnes and Noble.  The week was full of fun and appreciation for literature.

Last week held a great many zombies on campus, and no I don’t mean sleep deprived students. There were literal zombies. Why? Because it was Zombie themed week here on campus. CAB hosted several events from Spring Fling where students volunteered their time to put smiles on developmentally disabled adults faces to a zombie carnival complete with funnel cake, rides, and games. The week ended on a less than dead note with a Great Gatsby themed formal in Garner. There were tons of flapper dresses, feathers, and glitz at the event where students danced the night away. Thank you CAB for a great week of fun! We hope you joined in on the festivities and are feeling a little more “alive” this week! 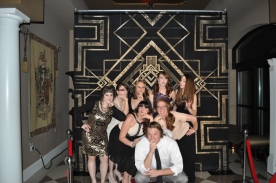 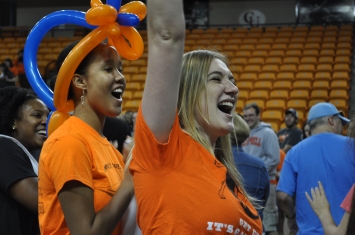 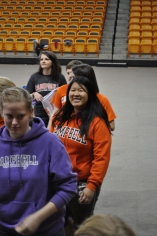 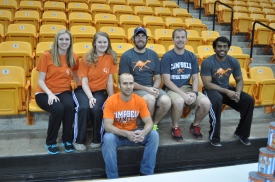 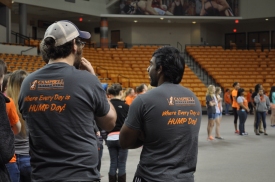 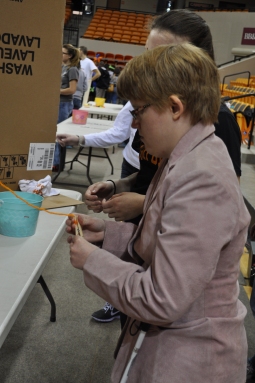 Because of a Cardboard Box

Once upon a time, there was a dream to build a boat.

The goal was for it to float.

There was just one problem though,

A problem that would provide quite the show.

All boats were to be made from cardboard.

No matter, though, there was a gift card award.

Boats were made with much effort and time,

But it was when dry that they were at their prime.

Would they make it when all soggy wet?

It didn’t matter for there could be not one regret.

Off they went in the water blue,

Each going two by two.

There were a few soggy flops

But fun was had by because of a cardboard box.

There you have it an account of CAB’s Cardboard Boat Race that rhymes. Isn’t it just fine? Oops, there goes another rhyme. Back to the story, though. Three crews showed up to race each other with various types of boats. Some sank and others held up really well. It was great fun to watch. Participants got gift cards as well, and trophies were given in the following categories:

Congratulations to all and bon voyage! 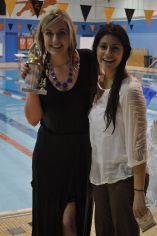 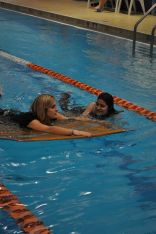 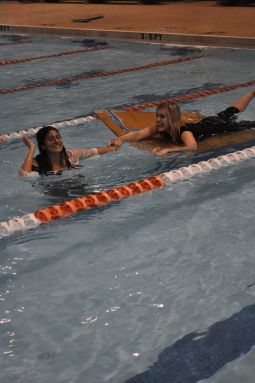 Pictures and video by: Joanna D’Ancona

I consider myself a lover of bacon. I mean, what doesn’t taste better with bacon? It is fabulous, and of course so are pigs. That being said, I don’t know if I want to eat bacon anytime soon. What happened you may ask to change my love of bacon? The answer is nothing. I still love bacon, but I had my fill of it  at the CAB Bacon Day event tonight. No worries though, I’m sure it will only last a day.

The event was held in Rumley and hoards of students lined up at the doors to ensure they got a coveted t-shirt. I stood in the cold for an hour, where my toes went numb and I was given bacon gum to try. I do not recommend the gum. Everyone ended up spitting it out. If you want an idea of what it tasted like think dog treat with molasses and in gum form. My advice, don’t try it. You will need gum for the gum.

The wait was worth it though. Not only were the t-shirts great, but the whole event was. After getting an “I Love Bacon” shirt, students could sample a bunch of bacon food. There was turkey bacon, peppercorn bacon, bacon in chocolate, bacon dip, sausage wrapped in bacon and ice cream (it wasn’t bacon flavored). After eating, you could participate in bacon themed games like “bacon hole” (corn hole), pig races, pin the tail on the pig, and bean and bacon soup eating contest. Prizes such as piggy banks and other bacon flavored treats were given out in bacon bags to winners. 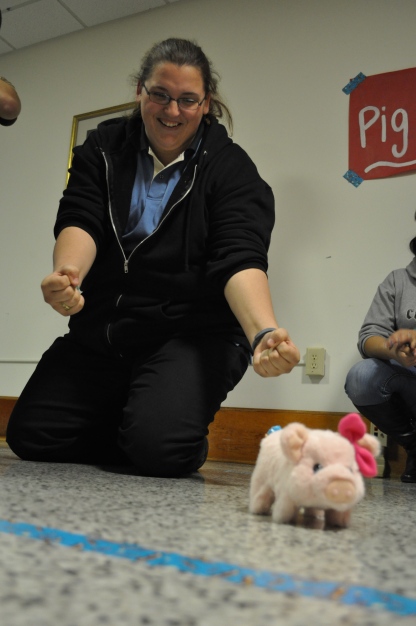 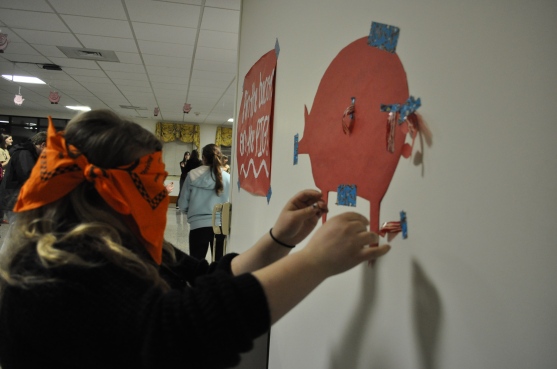 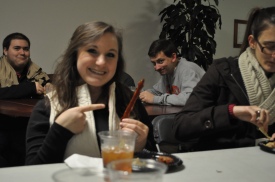 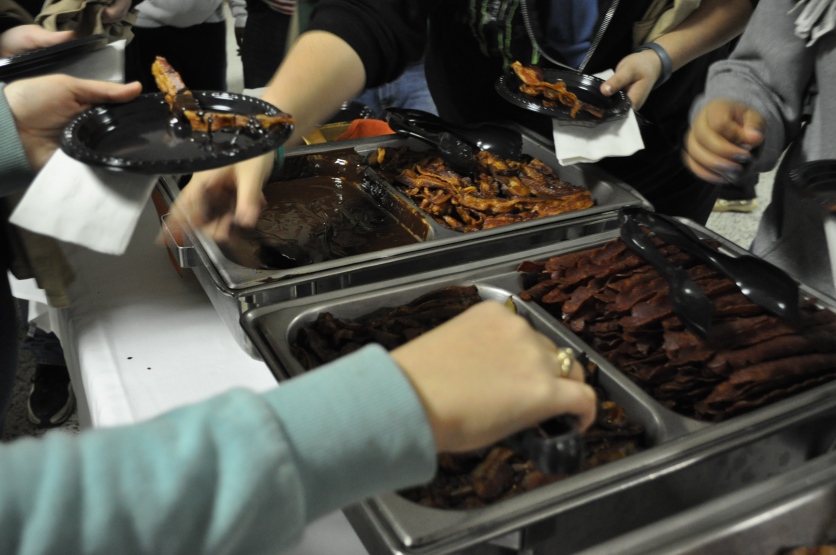 As you can see, bacon and pigs were the order of the day, but let me tell you, it was sooo good. The pig races and chocolate bacon had to be my favorite, and you can bet your bacon I’m wearing my bacon love t-shirt.

Thanks CAB for a great event!

Like Loading...
Parties–who doesn’t like them? Most do like them, but there was a different sort of party going on in Lundy Fetterman recently thanks to the Dr. Merry for hosting. If you missed out, don’t worry, it is only the first of many!
On January 31, 2014, Dr. Merry hosted the first Campbell lan party of 2014.  There will be three more lan parties in 2014; one more this semester and two more in the fall semester.  For those of you who have never heard of a lan party, it is a gathering of people who play games together on their computer off line.  No video games are required, everyone just brings a laptop or desktop computer to connect to a router with everyone else.
Dr. Merry is the ITS professor at Campbell and has been here since 2006.  That same year the first Campbell lan party was held.  This event is not limited to current Campbell students.  Alumni such as David Helms often comes back to take part in the festivities and even helps organize the event.  “The event is a wonderful time to bond,” says freshman Grant Merry, son of Dr. Merry.
Photos and Written by: Hannah Gooding 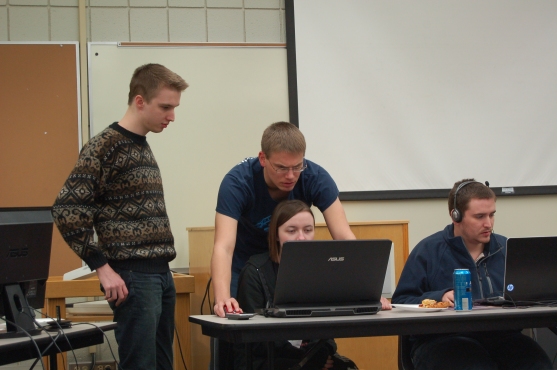 It was freezing last night; however, there were students wearing leis, shorts, tank tops, and sunglasses. Why? Because it was beach night at the men’s basketball game. One lucky winner even won an all expense paid trip to Myrtle Beach! Wow! 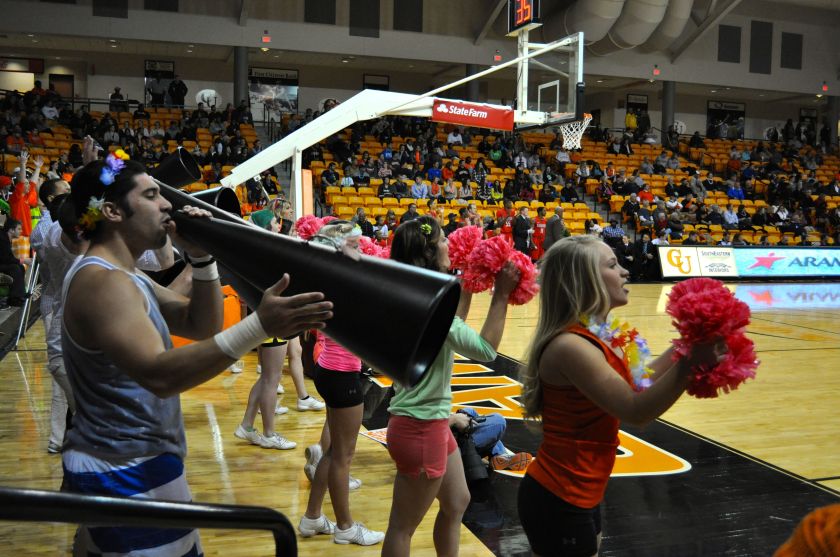 Last night’s game wasn’t just special because of the theme, it was also a win for the Camels, putting them first in the North Division!! With a score of 65-63, the Fighting Camels beat Radford after a close game. Not only that, but Reco McCarter’s 360 dunk made headlines on Sportscenter. How great is that?

If you didn’t go to the game last night, you missed out on a fun time, but at least you didn’t get odd looks for inappropriately dress in January. 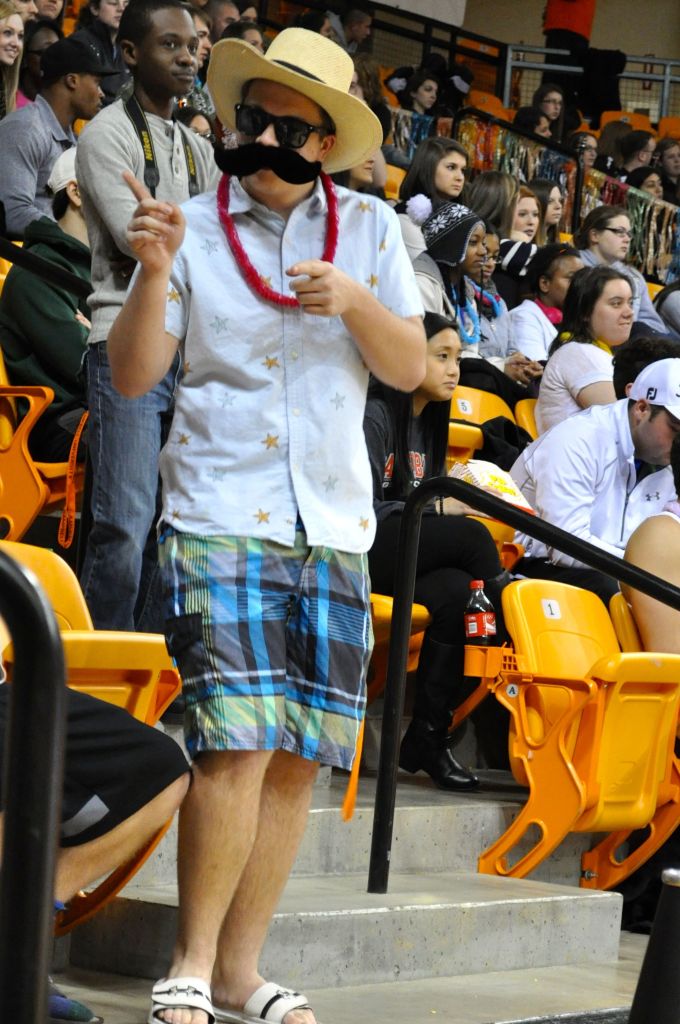