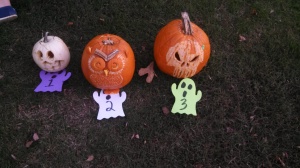 Pine Burr staff put together a fun pumpkin carving contest Wednesday, while the turn out was not as large as was hoped, there were still some crafty carvings. The contestants were able to win prizes for their pumpkins too. First place winner, Justin Baird, won a $25 gift card to Barnes and Nobles for his owl pumpkin. Nicole Fitzgerald won second place for her white pumpkin with traditional face, taking home $15 iTunes gift card. Finally, third place went to Jacob Knox for his The Punisher face pumpkin. He won a homemade pumpkin pie.

It was a lot of fun and such a beautiful day! Thanks to everyone who came out and helped and participated. Happy Halloween!!!