This past weekend CAB took a bus load of students to Atlanta, Georgia to go to Stone Mountain, the Coke Factory, and to see a Braves baseball game.  Maybe instead of considering the group gone for the weekend, we can say that they took the CU spirit with them to Atlanta.  As they explored the sights and sounds of Atlanta, I’m sure they couldn’t help but wish they could be at the soccer game getting a pair of free sunglasses.

Saturday evening, students and fans filled the hill at the soccer field to watch the men’s soccer team take on UNCC.  Such a large crowd of people came out that Campbell Athletics were out of  the free sunglasses by 6:10!  Make sure that if you want to receive the free stuff they give out, you get there early.  Even though we lost 6-1, it was still a beautiful night to cheer on the camels. 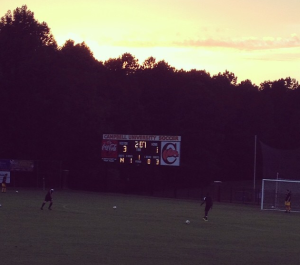 The evening prior, students filled Turner Auditorium to watch The Edge of Tomorrow.  It was a movie where Tom Cruise repeatedly battles aliens who are causing a world war.

Tuesday: Bacon Day at 7pm in the Rumley Center

Beach in the Creek in Academic Circle from 8pm-10pm

Women’s Soccer at 1pm against Liberty

Men’s Soccer at 3:30 against Davidson

Football at 6pm against Valparaiso