Many things happened this weekend kicking off the week before Halloween.  CKI club began their Haunted Trail in the woods behind Lundy.  If you didn’t get the chance to go yet, they will still be doing it at the end of this week.  There was also a pageant for dudes on campus put on by DPhiE and it was pretty funny to watch the guys strut their stuff.  Friday night, The Fault in Our Stars movie was played and many tears were shed.  With athletics this weekend, the football team chartered a plane for their trip to play Marlst.  They lost, but only by one touchdown.  Men’s soccer won their match against Presbyterian with fan’s cheering them on.  CAB also took a trip to Charlotte this weekend to stay at the Great Wolf Lodge and go to SCarowinds.  It was a great time, riding rollercoasters, water slides, and going into haunted houses. 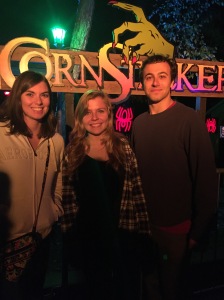